It’s an honor to host Wendy Shang today; I loved her latest book, How Home Looks Now. We got connected through our mutual editor and though we have yet to meet in real time and space, I know we would click. I mean, she’s a fabulous writer and she loves baseball! What else is there to know?

While I was in revisions for my first book, The Great Wall of Lucy Wu, I took a break one day to watch the documentary, Mad Hot Ballroom. It is, on the surface, about fifth-graders in New York learning how to ballroom dance, but like any good story, there’s so much more going on. We watch kids begin to navigate that strange land we call puberty, exploring and wondering about the bigger world, failing and trying again at what scares them and matters most. They have tiny crushes while they renounce any semblance of romantic feelings. They learn to be courageous, mannerly and kind.

It’s the perfect documentary for middle-grade writers, if you ask me.

The movie is terrifically diverse, being in New York City, and in one scene, three Chinese-American girls sit on a step and discuss boys. In that moment, I completely, and rather unexpectedly, lost it. I realized I was looking at my readers, the ones that I was, in the back of my head, writing this story for. Every detail of my main character had been chosen for them, and I hoped they would see themselves, laugh, connect and approve.

While writers write for many (we hope!), for me, there is always that special reader of the heart that I aim for, the one that I picture sitting with my book, and having the reader respond in an especially profound way. For my latest book, The Way Home Looks Now, Peter Lee tries to use baseball as a way of bringing his grieving family back together after the death of Peter’s older brother, Nelson. Peter’s initial hope for the team is thwarted when his baseball-ignorant father announces that he will be coaching the team, but after a particular incident redefines the team, Peter learns to see him in a new light.

While I was writing, I kept two readers in mind. The Peters of the world were my first readers of the heart. I tried to honor the experiences of those who have lost their siblings as children. In Peter’s case, his grief has alienated him from friends and given this once-carefree child a sense of otherness. He occasionally resents his sister, who seems to have stopped mourning for their brother.   He also worries desperately about his mother and how she will recover. He yearns for the joyful memories of his brother without the painful tinge of loss.

My second reader of the heart was much closer to home: my father. When I was young, my father coached my brother’s team despite having none of the usual parental experience that comes with this type of job. In the course of the season, he had to handle a difficult situation (which I won’t say, as it is a spoiler in the book), and I loved the story of how he did it.

I did not, in the early draft of this story, envision the relationship between Peter and his father playing a very strong role, even as I wanted to honor my father’s actions and values. My own father in many ways was very much a typical, first-generation-in-America parent. He was short on shows of affection and approval, and long on exhortations to work hard and be the best. Even as an adult, I remember trying to not to feel sick with jealousy at a friend’s wedding many years ago, while the father-of-the-bride lavishly toasted my friend’s many fine qualities in a toast; I knew I had no such display of affection in my future. I had cast Peter’s father in a similar, though not identical, mold of reserved honor and work.

But the truth will out, as they say. Writing about the fictional father forced me to look more closely at the motivations behind my father’s actions, and as a writer and a parent, one thing became abundantly clear: a father who does not love baseball or dream of athletic glory via progeny coaches a kids’ baseball team because he loves his child. As strange as it sounds, I had always been so focused on nobility and justice behind his act that the original motivation to coach the team eluded me until I dug deep to understand my character’s motivations.

My father passed away four months before the publication of The Way Home Looks Now. He had reached the point in his life where he did not read much, and I can’t pretend that he would have read my book, though he knew about it and was pleased. By making him the other reader of my heart, I became the audience for his unspoken words and at last, I heard them loud and clear. 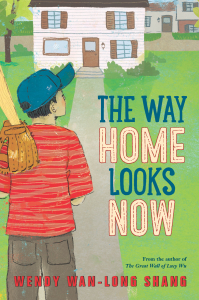