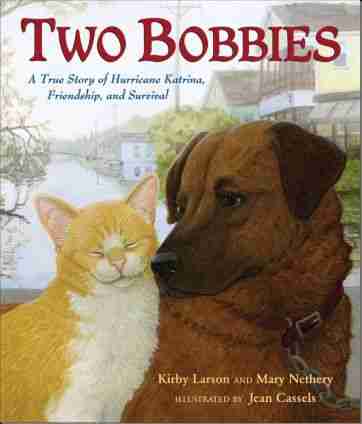 A True Story of Hurricane Katrina, Friendship, and Survival

Kirby Larson and Mary Nether are the best of friends, just like Bobbi and Bob Cat, having met in a writers workshop led by Jane Yolen several dog years ago. They first saw the Two Bobbies on Anderson Cooper 360° and found hope in the Bobbies’ story of friendship and survival. Mary is the author of many picture books, including The Famous Nini: A Mostly True Story of How a Plain White Cat Became a Star. Kirby and Mary donate 10% of their authors royalties from the Two Bobbies to Best Friends Animal Society.

Jean Cassels has illustrated more than fifty nonfiction nature titles. Her other titles include Groundhog Stays Up Late and Br’er Rabbit Captured! Jean lives with her husband in New Orleans. They left the city with their three dogs a day before Katrina, and it was six weeks before they could return home. Although there is still much left to accomplish throughout the city, Jean is glad to say that through the efforts of the residents and the visitors who have come to help, New Orleans is making a comeback.

Simple prose introduces two animals, a cat and a dog, that survived Hurricane Katrina in New Orleans, and, after four months of wandering, were rescued by the Best Friends Animal Society. The narrative is obviously part supposition as the original owners were never found, despite efforts to locate them. Since both pets had bobbed tails, a shelter volunteer named them Bob Cat and Bobbi, hence the book’s title. It was soon discovered that Bob Cat was blind, making his survival even more amazing and underscoring the idea that the two critters relied on one another during their ordeal. The terrifying event is told about in a matter-of-fact way, with the text concentrating on the “feel good” aspect of the two Bobbies. The gouache illustrations, done in soft pastel shades, present realistic glimpses of the devastated city that serve as a backdrop for the animals’ struggles. An afterwordincludes a photo and additional information. An excellent introduction to Katrina for young children, this touching animal tale memorializes a modern catastrophe and pays tribute to the many volunteers who traveled to New Orleans to help.

Larson and Nethery relate the true story of a dog and a cat, both tailless,that come to be called Bobbi and Bob Cat, respectively. Abandoned in New Orleans after Hurricane Katrina, the inseparable duo wander the devastated city for months before being taken into an animal shelter and then finally to a new home on a ranch in Oregon. The improbability of the pair’s survival is heightened by the astounding discovery that Bob Cat is blind and surely would not have persevered without Bobbi’s protection. . .As it presents a story that deals with the tragedy of the storm yet focuses on hope and triumph, this effort will likely hold much appeal for survivors of natural disasters, particularly Katrina.

Abandoned during the Katrina evacuations, pets Bobbi and Bob Cat wander dangerous, debris-strewn streets seeking food and water. Eventually taken to a rescue shelter, the Bobbies show distress when separated but remain calm when together. Workers then discover that Bob Cat is blind and that Bobbi seems to serve as his seeing-eye dog. A national news appearance ultimately results in the animals’ shared adoption in a happy new home. The descriptive, sometimes folksy prose and realistically rendered gouache illustrations accessibly convey the Bobbies’ experiences and mutual devotion. An afterword, with a photo of the real-life furry friends, notes the parts of the narrative that are speculative, such as the animals’ preshelter experiences. This moving story about the importance of friendship and home highlights the plight of the hurricane’s lost and left-behind animals, as well as the value of animal shelters.

Thank you to Marya Jansen-Gruber for permission to reprint this excerpt from an interview that first appeared on her blog, Through the Looking Glass Children’s Books Reviews, in September 2008. Find the full interview here.

Join me today for an interview with Kirby Larson, one of the authors of the book:

Mary and I had been looking for about six months for a story to write about unlikely animal friends. Serendipity struck when she turned on the TV one night, about six months after Hurricane Katrina, and saw a snippet about the Bobbies on Anderson Cooper 360.

Did you go to New Orleans to do research? If not how did you capture the atmosphere of the city in the months following the Katrina disaster?

I had gone to the Gulf Coast twice – once to Pearlington, Mississippi and once to Houma, Louisiana – to help with Katrina clean-up and recovery efforts. I remember the profound silence in Pearlington, six months after the hurricane – not a bird to be heard anywhere. So we had that experience to draw on as well as input from the book’s illustrator, Jean Cassels, who lives in New Orleans and was evacuated during Katrina.

Did you interview some of the people who were at the shelter when the two Bobbies arrived?

Our top priority was to be as accurate as humanly possible, which required much research and many interviews. We interviewed all the key volunteers at the Best Friends Animal Society temporary shelter in New Orleans, including: Barbara Williamson, who kept the two Bobbies in her motor home; Whitney Jones, the intake volunteer and Shelley Thayer, one of the pet detectives. We even spoke with the vet who cared for the Bobbies after they were adopted.

We are so appreciative of the work done by the volunteers of Best Friends Animal Society that Mary and I are donating 10% of our authors’ royalities to that organization.

Have you met the two Bobbies?

Though Mary and I didn’t get to meet them at the same time, we have both met them. They were adopted by a wonderfully generous woman, Melinda Golis, who has a ranchful of rescue animals in southern Oregon. Melinda also operates a therapeutic riding program there – Bobbie dog loves to go along on trail rides! Sadly, Bob Cat died a few weeks before the book came out but we are all comforted by the fact that he was treated like royalty in his last years. He was quite the party-cat and followed you around the house, determined not to miss a word of conversation.

Is it hard to write a book with someone else, and do you feel that the experience has brought you and Mary Nethery closer?

Writing a book is hard, whether you do it alone or with someone! Mary and I talked quite a bit about the process of working together, before we even put one word to paper. That helped. Honestly, it was a terrific experience. I’m not sure it brought us any closer because we are the dearest of friends but we loved collaborating so much we are now at work on a second book together!

Hear Kirby read the first pages of The Two Bobbies 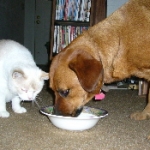 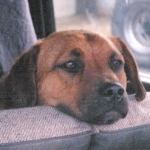 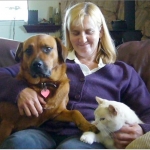 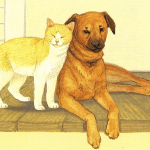 One of Jean Cassels’ amazing illustrations. 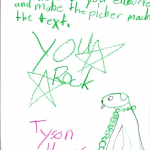 Fan letter for Kirby and Mary 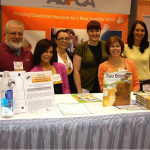 With the ASPCA crew at the book signing before the Henry Bergh Award Ceremony. 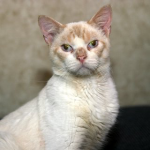 Bob Cat shortly after being rescued 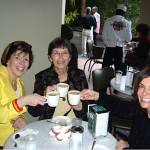