I’ve mentioned before how much I love the internet: it has brought me friends I’ve never met in real life/time. That includes the charming and enthusiastic Tracey Baptiste who has the most engaging video about her school presentations (note to self: be a teacher in your prior life). I am so honored to host Tracey, my last Friend Friday of 2015. 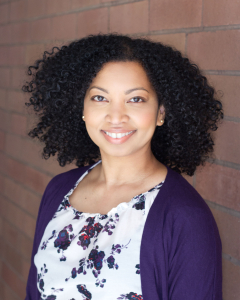 Today is Star Wars: The Force Awakens Day, which means literally zero people are going to read this blog post. Which means I can say anything! ANYTHING! BWAHAHAHAHA! I can tell you that I am compelled to write fantasy, like THE JUMBIES, because of my love for all things fantasy and sci-fi. Before writing this novel, however, I had never attempted any fantasy, despite being a lifelong fan. Wait, does a ghost story count? No? OK, Phew. It was never published anyway. But I think despite this being my first attempt at writing fantasy, this story, and my new emergence as a fantasy writer, was a long time coming.

I have wanted to be a writer since I was a toddler. It did not seem too far-fetched to me, since I was around plenty of storytellers in Trinidad. Every year around Carnival, calypsonians who have normal jobs the rest of the year, like teacher, banker, etc. morph into performing machines, with a full album of new calypsoes that parody recent news, and excoriate politicians, among other things. That’s EVERY YEAR. Quite a creative feat. But because so many people did this, it seemed quite natural to grow up and have a career as a creative person. Plus, we were home to V. S. Naipaul—required reading at school—and various other authors. If they could do it, why couldn’t I? 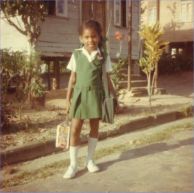 THE JUMBIES, though, took quite a long time to get into print. These creatures, straight out of the scariest folklore of the island, felt alive to me. The La Diabless, a beautiful woman with a cow hoof hidden under her skirt might be my uncle’s new girlfriend. The soucouyant, an old lady who shed her skin at night, burst into a ball of flame, and could come through the window to suck your blood was—I’m fairly certain—my grandmother’s next-door neighbor. I felt like they were all around me as I wrote. Watching. Nodding and shaking their heads. So it was hard to pin their story down.

I found the framework for the story in the folklore of another Caribbean island. The Magic Orange Tree is a Cinderella story from Haiti, and I loved the idea of Cinderella having to get her happy ending using a little magic and her own wits. Ultimately, only the very end of my story bears resemblance to the original folktale, but it was a great jumping-off point. 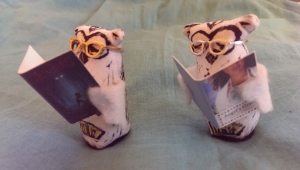 In THE JUMBIES, there are creepy creatures, and lots of adventure (think: cliff hangers on an actual cliff!), and I hope, I’m introducing a whole new kind of fairy tale to the world outside of my native Trinidad.

Corinne, the main character, is eleven. Fierce. Determined. And independent. She runs her own business. She’s in charge of the house and her father. But she misses her mother. So it is complicated when a beautiful stranger tries to become part of her family. And when the stranger turns out to be a jumbie…as we say in Trinidad…the trouble now start. 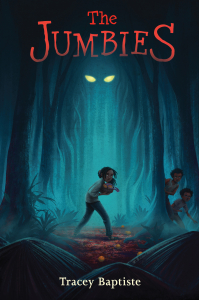 Bio: Tracey Baptiste is the author of the novels ANGEL’S GRACE, and THE JUMBIES, as well as several nonfiction books. She has an M.A. in Education, works as a freelance editor, does loads of school visits, and is a professor at Lesley University in their MFA program. You can book school visits, or her editorial services at www.traceybaptiste.com.