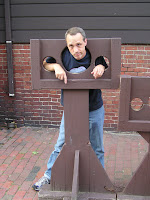 After today’s interview, Trenton Lee Stewart, author of the intelligent adventures about the Mysterious Benedict Society, will be much less of a mysterious to you, dear Reader. I first met him when we were both presenting at Harding University, in Searcy, Arkansas. He saved my life by finding an open coffee shop just as I was about to expire from caffeine withdrawal. We had a great conversation, chatting about revisions and angst and angst and revisions — the usual writer shop-talk. Because he is such a great all-round guy, I do not hold it against him that he has written a novel for adults, Flood Summer.

After the Harding event, I came home with a signed copy of The Mysterious Benedict Society for my friend Emma, my approval ratings went through the roof! Eager readers everywhere are counting the minutes until October 6, which is when the third book in the series, The Mysterious Benedict Society and the Prisoner’s Dilemma, will be released. So brew yourself a fresh cup of strong coffee, stir in some milk and get comfy for this visit with Trent:

Were you a flashlight-under-the covers or a run-and-play-and-collect-bugs kind of kid?

What was the nudge/spark that set you in front of that blank paper to write for children?

There was probably more than one nudge. An important one, certainly, was having a young child of my own. But it’s also true that I was going to be writing something — I’d been writing fiction for years — and it just so happened that the ideas I had been getting lately, the ones that really held my interest, seemed to fit best in a children’s adventure novel.

Who are the writers you read to be inspired?

You know, I never read to be inspired, not specifically. But inspiration does occur whenever I’m reading something great, and I usually only read classics or contemporary work that has been widely acclaimed, so the odds for inspiration are good.

Do you have any special writing talismans/tokens in your writing space? If so, what are they?

I started glancing around my desk when I read this question, which is more than a little ridiculous. If you have a talisman, you probably know it. So I guess I don’t. Should I get one? (interviewer’s note: not having one seems to be working out fine for you!)

I love the title concept explored by Carolyn See in her Making A Literary Life: What do you do that helps you sustain and nourish your literary life?

Reading, certainly. I don’t read nearly enough to suit me, in part because I am a slow reader. If somehow I could read all day and write all day at the same time, I would. In general, I suppose what I’m really doing is investigating — literature, language, the natural world, history and current events, it all interests me. I think more than anything else, I am motivated by what I do not know. So I guess the short answer is: I read a lot, and I look stuff up.

What’s the worst writing advice you ever received?

I’ve never received much writing advice. Maybe people can sense that I won’t listen to them anyway.

What was the scariest thing you’ve done as a writer?

The scariest thing is always giving the work to someone else to read.

What are you proudest of in your work?

The simple fact that I have managed to make it exist.

How do you know when you have a story just right?

How long was it between “I’ve got an idea” to “We’d like to publish your book”? And what happened in between those moments?

For The Mysterious Benedict Society it was almost exactly a year. There were a couple of months of taking notes and deciding whether I really wanted to attempt the book. Then about six months of writing a first draft, and another month or two of revisions in response to suggestions from my wife and a few writer friends. After that, things went quickly: I went to a post office during a rainstorm in June and mailed the manuscript to my agent, who called the next week to say he’d like to represent it, and the book sold in July. (There were a lot of revisions to come after that, however.)

For a possibly interesting point of comparison, my novel Flood Summer took almost three years of writing and intermittent revisions and sending out to agents and publishers. And it sprang from two separate novels that I had abandoned years earlier, and one of those emerged from a story I’d written years before. So from “I’ve got an idea” to “we’ll publish it,” in this case, took about a decade.

What, if anything, in the writer’s life has caught you by surprise?

Lots of things, actually, some good and some bad. One of the best surprises, though, has been the response of kids who love my books. Naturally, I had hoped to write something they would love. But I was still unprepared for the completely disarming look of excitement in their eyes when I met them, or the charming pictures they would draw and give to me, or the touching questions they would ask me in their letters, such as, “When do you stop being a kid?”

book two in the series, The Mysterious Benedict Society and the Perilous Journey

A series of questions about work habits:

Mostly computer, though when I’m out and about I often take notes longhand.

I prefer it tidy. It often gets messy.

About your new book: The Mysterious Benedict Society and The Prisoner’s Dilemma — Should readers new to your work start at the beginning or can they enjoy this book as a stand alone?

My hope is that they could enjoy it as a stand-alone; my guess is they would enjoy it more if they read the other two books first. But these are guesses and hopes. For certainties, you’ll need to ask my publishers.

What new tricks are up your characters’ sleeves? I am especially curious about Kate.

Kate has lots of opportunity to shine in this book. I wouldn’t say she has new tricks, per se, but she makes innovative use of all her old ones — her bucket full of tools and other items, her falcon, her agility, and of course her bravado. Reynie and Sticky, likewise, do not showcase new tricks so much as put their familiar talents to new uses. Constance Contraire, however, continues to develop her mental abilities in ways not a little alarming to her friends.

What new twists on puzzles will readers find in this book?

I don’t want to reveal too much, but there are definitely riddles and clues to be solved, as well as a puzzle that does not announce itself as such but that Reynie eventually discerns. As with the first two books, the Society also engages in a lot of important problem-solving — puzzles in effect if not in name.

How do you make room for your series characters to grow and change?

That’s been a challenge. It helps that they’re children, who by definition have lots of growth ahead of them. Mostly I’ve just tried to be sensitive to their personalities, to stay alert to how they would really respond to the situations they find themselves in. And I’ve tried to give them time — a year between the first and second books, several months between the second and third — to grow.

Puzzles are such an important part of your stories. How do you lay the groundwork for them? Have you ever painted yourself into a corner?

Many of the puzzles in the first book — the chess riddle, the maze, the written test that was not what it seemed — came to me of their own accord, as ideas often do. They were part of what prompted me to start the book. After that, though, when more were called for, I had to pay more focused attention to the way that riddles and puzzles work. The sort that interest me usually involve some form of misdirection — like magicians and sleight-of-hand artists, they lead the character (and possibly the reader) to pay attention to the wrong clues. (For them to be satisfying, the right clues also need to be present, but they are deemphasized.)

Laying the groundwork has usually involved first developing a general sense of plot, then trying to figure out how to use puzzles to advance that plot in a way that seems plausible. It gets complicated, of course, because I want all of the children to play their parts — to make good use of their particular talents — and I also take into account their personalities and relationships and the effect these have on the problem-solving process. The result is a lot of pages of notes, lots of scribbled ideas that come to nothing. So yes, unfortunately, I have painted myself into several corners. The Society might find a way out of them, but the author has to sit dejectedly and wait for the paint to dry.

I’m afraid to ask . . . is this the last in this wonderful series?

Thank you very much for caring. And the answer is … maybe.

Not about your new book, but a general question. I listened to an interview you did once in which you said you promised yourself at 12 never to forget what it was like to be 12. Tell us more about that, especially in regards to your writing.

I remember noticing that some adults discounted children in a way that seemed thoughtless and in many cases unfair. I got the sense that kids’ problems were considered to be of little consequence because they would be resolved — that is, they would no longer pertain — in adulthood. But my problems certainly seemed real enough to me, and I suspected that the miseries of children could be just as unpleasant as those of adults, even if their causes seemed trivial. Obviously, most kids hit upon this notion at some point. But while contemplating the nuances of all this, I had an odd self-conscious moment when I became keenly aware of the fact that I was having these thoughts, and then suspicious that years later I might — as some adults seem to do — forget that as a kid I’d ever been capable of thinking in complete sentences and experiencing real emotions. So I promised myself I’d remember that moment, and somehow I did.

I’m not sure exactly how this has influenced my writing. But I try to see kids as humans rather than props in the lives of adults, and I imagine young readers can sense this.

What’s next for you? I know you have one adult novel, Flood Summer. Are there plans to write more in this genre or have you come to your senses? (just kidding)

Right now I’m working on another book for the same age group — another sort of mysterious adventure — but I love writing for adults, too, and definitely plan to do more of it.

Is there anything you wish I’d asked you? If so, what is it?

Well, I was wishing you would ask, “Is there anything you wish I’d asked you?” So I guess now my answer is no.

Prior interviewees have shared secret talents with us (for example, Susan Patron shared her recipe for making a flaming dessert). What secret talent do you have that we might not know about?

I used to be a pretty good drummer. It’s been a while, though.

Trent, thank you so much for this visit. I know I’m eagerly awaiting a read of Prisoner’s Dilemma! I was a drummer once myself, eons ago, and still have the practice pad to prove it!