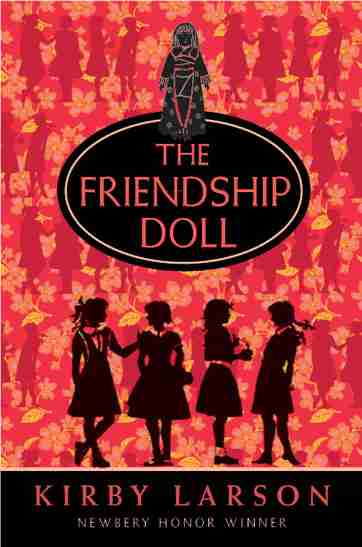 A testament to all kinds of friendships.

I am Miss Kanagawa. In 1927, my 57 doll-sisters and I were sent from Japan to America as Ambassadors of Friendship. Our work wasn’t all peach blossoms and tea cakes. My story will take you from New York to Oregon, during the Great Depression. Though few in this tale are as fascinating as I, their stories won’t be an unpleasant diversion. You will make the acquaintance of Bunny, bent on revenge; Lois, with her head in the clouds; Willie Mae, who not only awakened my heart, but broke it; and Lucy, a friend so dear, not even war could part us. I have put this tale to paper because from those 58 Friendship Dolls only 45 remain. I know that someone who chooses this book is capable of solving the mystery of the missing sisters. Perhaps that someone is you.

I fell in love with each of the characters I met in this book. I wish Ms. Larson could write an entire book about each of the characters. Ms. Larson seamlessly places each girl in her setting and time period. The voices of the girls and Miss Kanagawa intertwine beautifully. At the end of the book, the reader learns the story behind each of the characters, and we learn facts about the actual events that occurred. This book would be a great fit into a study of Japan, or a genre study of historical fiction. After reading the book, I could see classes researching the actual Friendship Dolls and the events that took place before and after they arrived. I, myself spent time researching the topic online as I read the book. The book ends in present day with a sweet but sad twist that left a smile on my face and tears on my cheeks.

Larson brings her talent for historical fiction to this story of one of the 58 handcrafted, child-size dolls Japan presented to the United States in 1927 as a goodwill gestures. Fans of doll stories will be enchanted by the way Miss Kanagawa changes the lives of five children of varying circumstances over a span of decades and learns to feel love despite herself. The theme of being kind to others could come across as didactic in less-skilled hands than Larson’s, but the initial contrast between the doll’s moralizing, superior tone and her actual disregard for humans lightens the mood considerably. The story is not solely lighthearted, however; heavy topics such as death, grief, and aging are addressed in a straightforward yet remarkably affecting manner. The book’s background is meticulously researched, with the era of the 1920s-40s evoked through slang and radio-show references, and authentic Japanese cultural details are thoughtfully described. An author’s note explains that some pivotal plot points are fictionalized but the true story of the Friendship Dolls is so intriguing that readers may be moved to learn more. A little research shows that the author cleverly constructed the narrative to match Miss Kanagawa’s real-life fate, a details that will delight historical-fiction enthusiasts. The idea of a doll becoming more human through its interactions with children may not be wholly original, but this is part of the comforting appeal of this lovely tribute to a little-known piece of history.

In 1927, Japanese school children sent 58 dolls to the children of the United States as a gesture of goodwill and friendship. Newbery-honor author Kirby Larson (Hattie Big Sky, 2006) shapes a touching story, following the travels of one of these dolls, Miss Kanagawa. At first, Miss Kanagawa is haughty and dismissive of the children who come to see her on display. “I am above all an ambassador, a dignitary. I simply happen to be a doll.” But through the course of the story, her heart is awakened by four different children she meets during her travels throughout the United States during the Depression years and those leading up to WWII. Even though each character’s story only lasts for one chapter, Larson develops full characters with emotional resonance and unique perspectives, shedding light on how the Depression affected a range of children. The historical details are rich and interesting, woven throughout each story. The final chapter effectively brings the story to the present day, providing a sense of closure and possibilities. An interesting author’s note provides information on the line between fact and fiction for each of the chapters, as well as more information on the history of the Friendship Dolls.

In 1927, Japanese schoolchildren sent the U.S. 58 dolls, which were viewed as ambassadors of friendship and were exhibited around the country. In Larson’s unusual novel based on this event, an old doll maker wishes that his doll, Miss Kanagawa, will be ‘awakened by the heart of a child.’ Starting with a chapter set in 1928, four stories follow Miss Kanagawa through four girls’ lives, changing each child’s life and, in turn, experiencing changes, too. The girls include wealthy Bunny and Lois [sic], who lives with her desperate father in the Depression-era FSA camps; and with deftly handled historical details, Larson touches on important issues shaping the world of each child, including the Depression, class and gender differences, and Pearl Harbor. The well-developed characters are appealing and distinct, despite the stories’ brief lengths, and a concluding, contemporary fifth episode effectively wraps up the book. . . . This is a book that will surely find fans. A fascinating author’s note adds historical information.

The Friendship Doll has a lot to like: a basis in an obscure but kid-friendly historical event; strong, three-dimensional characters; full realized settings; and enough of a narrative mix to appeal to readers with a range of skill levels. Fans of Hattie Big Sky will especially not want to miss The Friendship Doll (which, though different, has a bit of a similar feel). Highly recommended for middle grade readers, anyone who enjoys historical fiction, and anyone who has ever wondered what a doll might be thinking.

Fans of historical fiction will particularly appreciate finding not one but four different specific historical contexts brought vividly to life. . . The girls’ stories are drawn with honesty and imagination, and their four individual characters are well composed. An author’s note identifies elements of the story that are based in fact (including the exchange of dolls between the Japanese and American governments in 1927) as well as providing more detail about each setting.

The Bulletin of the Center for Children's Books

Each of these four interconnected stories stands solidly on its own. Each provides a wealth of detail about America during the desperate economic times of the “Dirty Thirties.” Author Kirby Larson has integrated famous people, events, and concepts of those days into these stories. The tales are both enlightening and emotionally engaging. The degree of love and loss set against the Great Depression makes this a notable book about friendship that will be enjoyed and remembered by young people who long ago locked away their own dolls. And to those of us who never played with them.

This isn’t a drop of magic; this is a whole bookful! I fell for it hard in the opening pages. I was crying by the end of the prelude. And then each of the variations got me, too. Together they add up to a book I place on that exalted shelf withThe Secret Garden and A Little Princess. Read the rest of the review here.

Amazon Best Book of the Year So Far

A Mission of Friendship, a story about Friendship Dolls from the Japanese American National Museum website.

Find out if there’s a Friendship Doll in your state. See info/list. 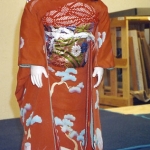 Miss Tokushima, one of the original 58 Friendship Dolls, housed at the Northwest Museum of Arts and Culture, Spokane, Washington 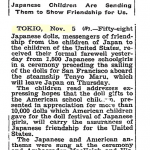 This was the article that launched Kirby on the research for her book. 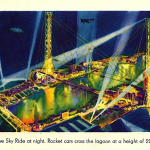 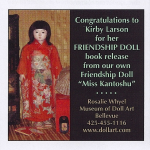 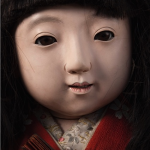 This is Miss Miyazaki, a missing Friendship Doll found after an intrepid Minnesota librarian was inspired by Kirby’s book to hunt for her in the old library’s basement.