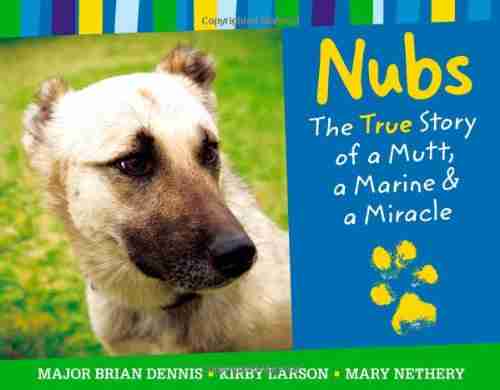 Published by Little, Brown and Company

The True Story of a Mutt, a Marine & a Miracle

Nubs, an Iraqi dog of war, never had a home or a person of his own.

He was the leader of a pack of wild dogs living off the land and barely surviving. But Nub’s life changed when he met Marine Major Brian Dennis. The two formed a fast friendship, made stronger by Dennis’s willingness to share his meals, offer a warm place to sleep, and give Nubs the kind of care and attention he had never received before. Nubs became part of Dennis’s human “pack” until duty required the Marines to relocate a full 70 miles away—without him. Nubs had no way of knowing that Marines were not allowed to have pets.

So began an incredible journey that would take Nubs through a freezing desert, filled with danger to find his friend and would lead Dennis on a mission that would touch the hearts of people all over the world.

Nubs and Dennis will remind readers that friendship has the power to cross deserts, continents, and even species.

★ Kirby Larson and Mary Nethery, authors of the cat-and-dog Hurricane Katrina survival story Two Bobbies, pair with Dennis on this hugely inspirational true account… Simple dotted line maps make Nub’s jounreys palpable. The gritty, low-res shots of the two companions against the bleak Iraqi are married with text so gracefully that many of the compositions could be book jackets. Dennis’ emails and various other official documents liven the layout, but the payoff is the grinning face on Nub’s american passport. At long last he was going home.

Major Dennis discovered Nubs. . . at a border fort in Iraq while serving there in the Marine Corps. Although he visited the fort infrequently and stayed only a few days at a time, Dennis and the feral dog bonded as the soldier shared his food and bed with the loyal animal. Often they even stood guard duty together. One winter day, when the Marines traveled 70 miles north across the frigid desert to headquarters, Nubs followed, arriving there, thin and footsore, two days later. Determined not to leave him behind again, the Marines adopted him, and eventually Dennis raised the money to have Nubs shipped back to America. Few will not be moved by the concluding photograph. Told in brief text augmented by Dennis’s facsimile e-mails and illustrated with clear color photos, this story presents a view of the Iraq war that makes it accessible to very young gradeschoolers, a welcome addition to collections serving that audience and especially useful for children of soldiers deployed in Iraq and Afghanistan.

This is a feel-good entry in the current trend of inspirational true animal stories.

Everyone, from school kids to senior citizens should read this story of U.S. Marine, Major Brian Dennis, and the scrappy leader of a desert pack… The journey of this soldier and his canine soul-mate, told in sparse prose with e-mail messages from Dennis highlighting each section, is astonishing and unforgettable. Read it yourself, read it to your children, and pass it along to family and friends. Just make sure you have plenty of Kleenex handy.

Thank you to Elizabeth Dulemba for allowing the reprint of this interview, which first appeared on her blog in November 2009.

Kirby Larson and Mary Nethery have created a story about a wonderful dog who finds the perfect human, but goes through some serious trials to stay with him (Major Brian Dennis). I dare you to keep a dry eye as you read Nubs: The True Story of a Mutt, a Marine and a Miracle. Today, I ask Kirby about her latest picture book (which is already getting RAVE reviews).

Q. You’ve done it again Kirby – you’ve written a story that brought me to tears. How did you first hear about Nubs?

A. It was all thanks to Mary. We loved collaborating together on Two Bobbies and were looking for another project. She was convinced that we could find a story similar to the Bobs, but this time set in Iraq and, five minutes after she made herself a note to that effect, her husband walked out of his home office with a newspaper article about Nubs and Major Brian Dennis. He said, “I think this is a story you and Kirby would like.” She called me and we got on it immediately. Since Brian was still deployed in Iraq, it took us a few months to make contact with him. But in June 2008, after he had returned home, we flew to San Diego to talk with him about the possibility of writing the book. Nubs fell in love with us — partly in thanks to the Bow-Wow-Wonie Mary brought him — and that sealed the deal as far as Brian was concerned.

Q. This is an unconventional picture book with all the photography and military geography. Did it present any interesting obstacles to create?

A. I doubt there is a book written that doesn’t require wrestling with obstacles! 😉 The biggest challenge was that, if we had only known what Nubs had up his sleeve, we would have fitted him with a camera so that we’d know what he saw and experienced during his 70 mile trek across the desert! We had photos of every aspect of the story except the journey. The second biggest challenge was for the Little Brown art director, Patti Ann Harris, who had to work her magic to convert all of those amateur snapshots to resolutions/quality levels that could be printed in the book. We have no idea how she accomplished this huge task but we’re certain it has earned her sainthood. For Mary and I, the biggest challenge was gathering both photos and the permissions to use them from Brian’s team, which was dispersed after their mission.

Q. Have you met Nubs? Tell me about it!

A. We have met Nubs who is much smaller in person than you would think. He looks like a German Shepherd but he is much more petite. He’s not all that much bigger than my neighbor’s beagle (and certainly slimmer). Mary and I drove up to Brian’s house and Nubs greeted us at the door. As I mentioned above, Mary charmed him with the doggy brownie and from that moment on, he was our buddy. He is very sweet and smart and oh-so handsome.

Q. This is a wonderful companion book to your last one, Two Bobbies. Do you plan to do more books about rescued animals?

A. We do plan on writing other books together and we know they will continue in the nonfiction vein and feature animals in some way, but perhaps not necessarily rescued animals (though, to be accurate, Nubs was as much rescuer as he was rescued!). Right now, however, I have a book deadline looming so we’ve put our joint work on hold for a bit.

Q. How have these stories affected you?

A. They have affected me in countless ways, but I’ll share three. First, I gained a new appreciation for how animals can help us be the best we can be. Second, we receive emails every single day from people impacted by these stories—most of them adults. I have been amazed by the way these books created with children in mind have touched readers of all ages. Third . . .well, I’ll attach a photo to answer that. After 34 years of married life without a dog, we now are owned by one, Winston the Wonder Dog.

I want to thank Little Brown for making a generous donation to the ASPCA as part of their participation in this book, and Mary Nethery for being the Charlotte to my Wilbur. And I want to thank you for this chance to chat!

Thanks so much and I can’t wait to tell everybody about Nubs! 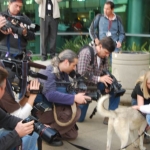 The “pawparazzi” when Nubs arrived in San Diego 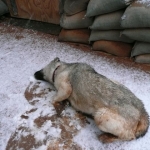 Nubs making “dog angels” in the snow at the Command Outpost 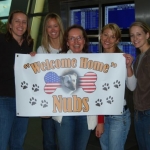 Nubs’ fans welcome him to the states 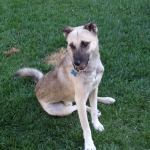 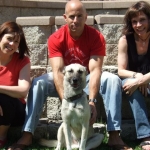 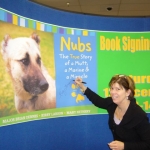 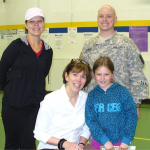 Kirby with a family stationed at a US base in Germany. 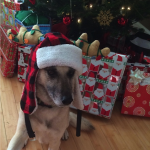