Nanci Turner Steveson is a repeat Friend Friday essayist. Her new book, Georgia Rules (Harper Collins) is not out for a few more months (don’t worry; I’ll remind you closer to the time. But I’m sure it’s possible to preorder her book from your favorite indie bookstore!). I’m delighted to host Nanci once again! 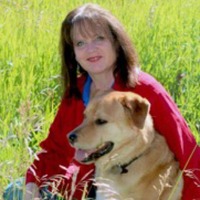 You inspire me. All of you. I hear you. I see you. I feel your pain, wallow in your joy, and for those fractions of moments we are together, if a tiny part of you lands in the secret piece of my heart, I share you, too. I realize that might sound a little creepy, so let me explain.

I have a new middle grade novel coming out on May 2nd. It is, without a doubt, one of my favorite things I have ever written. No, don’t ask me to pick which of my books I love the most, because I’ll turn around and ask you which of your children you love best. And we all know there is no true answer to that question. But there is something about the characters of GEORGIA RULES that have stuck with me, and made me want to pick up the phone almost every day to call them up and say, “Hey, how’s it going? I miss you guys!” The impact they have had on me is everlasting.

I think one of the reasons GEORGIA RULES is so dear to me is because I carried the characters and parts of the story with me for years before any of it ever got onto the page. It started with an autumn trip I took to Vermont in 2004 with my parents and my sister. Most of what we did was drive around and look at the stunning change of colors that you see on postcards and paintings, but not always in real life. On one of those drives, we came across an old building with about thirty paintings of roosters propped in the yard, spilling almost as far as the country road. Big roosters, little roosters, every kind of rooster you could imagine. We stopped and met the artist, whose name I do not know, but he told us his story and it stuck with me. 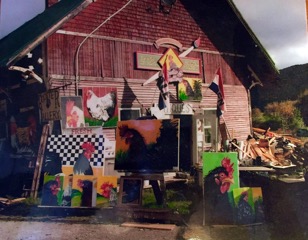 He was a Vietnam vet who bought the property shortly after his return from the war. What appeared to be a barn was actually an old train depot he had converted into an artist work space. His “back porch” was the platform where people used to wait for trains. He took us through the building, which was wall to wall paint cans, brushes, canvases, buckets, stacks of newspapers, half-finished rooster images, and enough turpentine to choke on if you didn’t move quickly. In the middle of this massive structure, in all the mess that made up his life, was his bed. In the middle of the room. He lived in there.

I was so fascinated by this man and his roosters, I took a photo of the place, enlarged it, and hung it near my work space as a reminder that, no matter what else befalls you, no matter your trials, or your finances, if you have a passion, you can make it work.

Fast forward to 2013. I was in the first year of a graduate class when we read an essay by the theologian and writer, Frederick Buechner, in which he was describing finding holy places everywhere, not just in a church. In particular, he described the inside of an old, abandoned barn and how it made him feel. In that instant, on a wintery Tuesday night in tiny Jackson, Wyoming, the main character of GEORGIA RULES, Magnolia Grace (aka: Maggie), stood in front of me as a frightened, misplaced twelve year old girl who had lost the father she barely knew, been uprooted by a crazy mama from a country club life in Atlanta to rural Vermont, and was trying to get up the courage to go inside the barn where she had last seen her daddy. The image was so real I had a visceral reaction and began furiously writing the beginnings of this story. I know for a fact my patient teachers and classmates were completely in awe of what they thought was my dedication to the lesson by taking such copious notes. I have since told them the truth. They forgave me.

Not long after that, I spontaneously asked someone I had only met twice to lunch. If you knew me, you would understand how odd this is. I’m somewhat of a hermit, and in fact, I had never done this before. But something told me, this lady is important to you, do it! So, I did. We went to lunch on my birthday, and she told me the story of a job she had fundraising for pediatric heart patients at a hospital in Montana, and brief bits of the lives of the three kids who were saved because of her work. No, there are no pediatric heart patients in GEORGIA RULES, but as the two of us sat there sobbing, I was so moved, I knew she had just handed me a magnificent part of my story.

Sometime in the next year or two I met a charming little girl through the professional theatre I work for. I don’t remember the circumstances of our meeting, but I have a vivid recollection of her thrusting her hands on her hips, tilting her head and saying, “Well, my name is Biz and I have two moms.” She was so proud of her family, and so loving and happy, that moment stuck to my heart. It’s still there. When I was writing the first draft of GEORGIA RULES, her words landed on the page with such force, an entire family grew from them. A loud and wild family of six kids and two moms who don’t believe any question is off limits. They don’t follow any of the rules Maggie grew up with in Georgia, and while this book is not about this family, they are the comforting counterpoint to the main character’s difficult home life. They are who she uses as a gauge for what a normal family looks and acts like.

There are many other things that contributed to this story. A brief memory of my own that brings the reader into the middle of an abandoned maple grove, smelling the sweet scent of old smoke and maple sugar, and stepping inside a vine-covered, swayback sugar shack. The way my own mother looked standing on a sand dune in Donegal when I was three and realized for the first time she was beautiful. The magic of watching my children experience their first big snow. I never met anyone named Freda from Alameda, but certainly I met someone along the way who notched a mark in my heart, and who came out in a bit part, yet whose few words changed the course of the story.

In essence, I think this post is my way of saying thank you, to you, and to you, and yes, even to you. Once you read GEORGIA RULES, you’ll understand the significance of that last line. But for now, until it comes out, until you get a chance to meet Maggie and Mama and Deacon and the wild and crazy Parker family, until you get to experience their lives for yourself, know I am filled with gratitude for all you have offered me along the way, little glimpses into your lives that turned into a book I believe will stick with you forever.

Nanci Turner Steveson grew up with a book in one hand, the reins of a pony in the other. Her debut, middle grade novel, Swing Sideways, comes out from HarperCollins on May 3, 2016, followed by Georgia Rules, summer 2017. Nanci is living proof that everyone can overcome the odds and reach their own personal dream. She lives in a historic meadow cabin in the shadow of the Teton mountains with two rescue dogs, an Arabian horse and a so-far wild mustang.