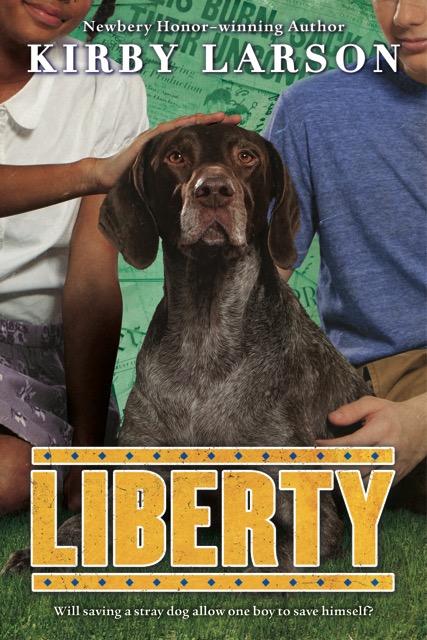 Can saving a stray dog allow one boy to save himself?

Fish has a knack for inventing. His annoying neighbor Olympia has a knack for messing things up. But when his latest invention leads Fish to Liberty, a beautiful stray dog who needs a home, he and Olympia work together to rescue her.

As Fish enlists the help of unexpected friends and allies to save Liberty, he finds her perceptions of the world – of race and war, family and friendship – transformed.

★ A white boy’s love for a dog crosses social divisions in this World War II story. It’s New Orleans in the 1940s. World War II is raging, Jim Crow laws are in effect, and neighbors sit on front porches seeking respite from the heat. Fish Elliott and his sister, Mo, are anxiously awaiting the return of their father from Europe and dreading the daily rounds of the telegram delivery boy. Whether it is a rabbit trap designed to save his neighbor’s victory garden or a contraption he uses to strengthen his polio-damaged leg, Fish loves to invent things. In a world where women are not allowed to be engineers, blacks and whites go to separate schools, and Germans are seen as evil, Fish’s inventions help bridge gender, racial, and culture divides. When Fish and his African-American neighbor Olympia find a stray hound, they are determined to take her in. But when an unscrupulous neighbor steals her, they need the help of a German POW to rescue her and her newborn pups. In this companion to Duke (2013) and Dash (2014), Larson once again creates an engaging story that is rich in historical details. She purposefully captures both the fear and the hope in a world torn by war as well as the simple love of a boy for his dog. Practically perfect. (Historical fiction. 8-12)

Larson’s latest gently touches upon serious themes of war and disability…. Give to young readers who have a heart for dogs or historical fiction.

Kirby Larson is a master at writing historical fiction and Liberty is no exception.  I highly recommend this and the other two books in the Dogs of War series.  All three focus on important themes of bravery, courage, friendship, tolerance and prejudice, and kindness under difficult circumstances. Plus they are engaging and well written.”

Thomas Edison said, to invent, you need a good imagination and a pile of junk. Fish Elliott had both. Unfortunately, he also had Olympia. Fish heard her before she even poked her braided head through the loose board in the fence between their yards.

“Aren’t you done with that yet?”

Fish grabbed a hammer, pounding extra loud to drown her out.

“It’d go faster if you let me help.” She slipped through the narrow opening in the fence. If they had been allowed to attend the same school, that loudmouth in his class would’ve called her String Bean. Olympia’s grandmamma, Miss Zona, said that Olympia had to turn around twice to catch her own shadow.

“It was a pure accident with your model plane,” Olympia said, tossing an imaginary pebble and hopscotching across the yard.

That “pure accident” left Fish’s B-17 with a broken wing.

He braced one piece of wood against and held another up to it at right angles, tapping a nail to hold them together. With every tap, though, the pieces of wood slipped apart. After the third try, he threw everything down in frustration.

“Let me help steady those.” Olympia reached over. “Now pound.”

The nail went right in.

She brushed her palms together, a know-it-all smile on her face. “Looks like you could use an extra pair of hands.”

Fish grunted, and kept nailing. He tapped two more pieces together and then two more, until the frame was more or less square. Sometimes, there was a goodly distance between what he drew in his plans and what got built. Did Thomas Edison ever have problems like that? Sure as shooting, Andrew Jackson Higgins didn’t. Mo’s boss was the most famous man in New Orleans—maybe the world. His sister said that even Hitler knew about Mr. Higgins. “He calls him the New Noah,.” Mo told Fish.

She brought home a different story from work every night. Fish’s favorite was when some big brass from the Navy told Mr. Higgins there was no way a small company like Higgins Industries could build ships on assembly lines. Mr. Higgins told that admiral, “Like heck we can’t. Just watch me.” Only he didn’t say “heck.” If such words had come out of Fish’s mouth, Mo would’ve cleaned it with a bar of Palmolive.

Olympia tapped Fish’s project with the toe of her saddle oxford. “What’s it going to be?” she asked.

“You’ll see when I’m finished.” Fish picked up a hunk of chicken wire.

He pointed at the size of the holes in the chicken wire. He’d been in town long enough to learn about crawfish. “They’d climb right out.”

“Oh, yeah. Ouch! Danged skeeter!” Olympia used her thumbnail to make an X on a mosquito bite on her arm before slapping it three times. “Well, you must be counting on catching something big,” she pressed. “That trap could hold three possums and a couple of squirrels.”

Fish hadn’t planned on building such a large trap. But Mo wouldn’t let him use a saw when she wasn’t around. “The bigger it is, the less likely that critter eating your grandmamma’s Victory Garden will see it. It’s like camouflage.”

Olympia wrapped a braid around her finger, her brown eyes challenging him. “You don’t say.”

“It’s my trap.” Fish tested the joints to see if the nailing job would hold. “I guess I know what I’m doing.”

“I saw Roy’s car here again the other night.” Olympia started stacking the unused scrap wood into a neat pile. Now Fish would never be able to find anything. “He’s awful handsome in that Navy uniform.”

She should mind her own beeswax. Roy was okay, but Fish had set three places at their dinner table too many times lately. Roy said Mo’s cooking was better than anything he got at the Navy base. Why a lightning bolt hadn’t struck him dead for saying that, Fish had no idea. His sister could change the oil in a car, rotate a set of tires, and replace a worn clutch, but cooking edible food seemed beyond her. If Miss Zona hadn’t sent over a plate of gumbo or some red beans and rice once in a while, Fish and Mo might have starved to death.

Olympia started humming “Here Comes the Bride,” while he wrestled a piece of chicken wire into place. It was hard to imagine that someone so ornery sang solos in her church choir.

“I can manage on my own now.” Fish picked up his plans, puzzling over them. How was he going to fasten on the trapdoor?

Olympia fiddled with a bent nail. “Why don’t you want my help?”

There was the model, of course. Fish kept his eyes on his plans. He wasn’t about to explain to Olympia that the last time he’d made a real friend, it was another kid in the polio ward. Someone like him.

“O-lympia!” Miss Zona hollered out the back door. “Come help me shell these peas.”

“Wish I could stay longer.” Olympia stood up, brushing off her dress.

Church bells chimed the hour. Fish folded the plans into his pocket. “I’ve got to go, anyway.” Mo had asked him to pick up some green beans for supper. That meant three places at the table again. Roy was crazy about green beans.

As he step-clomped to Cali’s Market, Fish heard the faint mournful blasts of steamships coming and going. He paused to listen, imagining workers unloading bananas and coffee beans from the holds, then reloading with sugar and such. He’d looked up New Orleans in the encyclopedia before he and his sister left Seattle. The map showed the city sandwiched between the bubble of blue that was Lake Pontchartrain and the snaky path of the Mississippi River. Now that he was here, he got the feeling, what with the lake, the canals, the bayous, and the river, New Orleans was nothing more than a sponge floating in the middle of an enormous bathtub. There was so much water, even the cemeteries were aboveground.

He passed by Campbell’s Hardware with the war poster in the window—bring them home sooner/buy war bonds—which always reminded him of Pop. He didn’t have to enlist, but he did, saying he could make a difference, and besides, Mo and Fish could take care of themselves just fine. But Fish knew he was the real reason Pop joined up.

“All you need is them green beans?” Miss Rose sounded downright disheartened. “We’ve got a nice sale on soup,” she pointed out. “Three cans for a quarter. And only three points each.”

Fish promised to ask Mo about the soup as he handed over the money and the ration book and took the packet of beans. A block away from the market, he spied some guys from school throwing rocks at the corner light post. Fish decided to avoid them by taking the long way around. Street didn’t look much different from his own: rows of shotgun houses on either side of the road, one of them painted the same shade of pink as Miss Zona’s. That reminded him about the trap. What was he going to do about the door?

“That your dog?” a gruff voice called out.

A man wearing suspenders over a dingy undershirt glared at Fish.

“I don’t have a—” he began. Then he turned around to catch a skinny cur hound trotting along behind him. She wore white stockings on her two front legs, and a white bib on her chest. The rest of her was a mottled coppery brown. Kind of like that patchwork quilt Miss Zona threw over her living room sofa. The dog cocked her head at Fish, as if asking, Don’t I know you?

“Well, if I catch her around here again, she won’t be anybody’s dog,” the man snapped. “Bound to go after my chickens sooner or later. Scram!” He flapped his arms and hollered at the dog; Fish felt like he was being yelled at, too. He let out his breath when the man stormed off.

Fish whistled softly, patting his leg, and the dog took a few steps toward him. “That’s a girl,” Fish encouraged. A few more steps. “Come with me, okay?” He could count her ribs. “I’ll find you some food.”

She froze, a front paw in the air.

The crabby man barreled around the corner of his house, picking up rocks as he ran.

The man clipped the dog on the hindquarters. She yelped, tearing off down the street, a blur of copper and white.

“She comes back around here again, I’m going to shoot her.” The man threw one last rock.

Fish scrambled away, as fast as he could with his bad leg.

And it was up to him to do it. 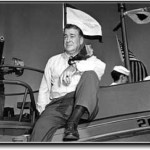 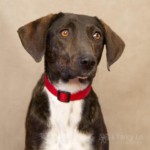 Dog I found on Petfinder.com (photo by Kim Kyle) to use as model for Liberty 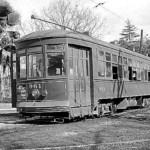 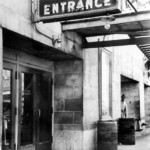