Remember that old song, “Do You Believe in Magic?” Well, I do. Remember the song and believe in magic. At least the magic that happens when beautiful words make us look at something familiar in a lovely new light. That’s the magic that happened to me a few years ago when I was facilitating a critique session for The Great Critique, a yearly event for our Western Washington SCBWI.

A soft-spoken gentleman read aloud his text for a Halloween picture book and I was completely enchanted. I wish I could say my advice that night improved his text — not much could — but I did give him the eensiest-beansiest marketing tip that actually worked out. So I feel like a very proud aunt about Tom Brenner’s first (of many) picture book, And Then Comes Halloween, out this fall from Candlewick. And I’m not the only one crazy about the book — check out the review in the New York Times! I hope this doesn’t go to Tom’s head.

Here’s a little bit about him: He was born in Ohio, colleged in North Carolina, Navied in California, was a (not very mad) ad man copywriter and then 6th grade teacher and is now a writer. Tom says, “For 13 years I’ve sent stuff out and collected rejections. Then this picture book makes it. Many hands helped in the shaping of it, especially my editor, Kaylan Adair, and I get the credit. What a deal!”

Pour yourself a cup of coffee and pull a chair up to the table for a chat with Tom:

Were you a flashlight-under-the-covers or a run-and-play-and-collect-bugs kind of kid?

I was a running-in-the-fields-and-woods-behind-our-house kind of kid. And because I lived a few miles outside of Massillon, Ohio where football was the king of sports, I played a little ball. I did catch bugs but never collected them — probably used them for fishing. 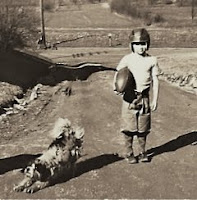 Tom’s going to win one for the Gipper

What was the nudge/spark that set you in front of that blank paper to write for children?

I taught sixth grade and we (the sixth grade teachers) tried to find novels for the reading program that related to the social studies curriculum–ancient civilizations. We had a hard time, so I decided to write one. The book was set at a time when Roman, Hebrew and a little bit of Greek cultures converged (three of the civilizations we studied). Still writing it.

Who are the writers you read to be inspired?

I used to read to my class everyday. So all the big current (and past) big names—Karen Cushman, E.L. Koenigsberg, Katherine Paterson, Sharon Creech, Gary Paulson, Robb White. Outside of that, Dickens is probably tops and close behind is Mark Twain.

Do you have any special writing talismans/tokens in your writing space? If so, what are they?

If you count a messy desk that I’m constantly striving to organize, but don’t, then that might be it.

I love the title concept explored by Carolyn See in her Making A Literary Life: What do you do that helps you sustain and nourish your literary life?

I write just about every day. It has become a habit I really enjoy. I get excited when I’m rolling along (see answer four questions below).

What’s the worst writing advice you ever received?

I asked a teacher in an Expository Writing Class about being a writer and he chuckled and said, “Find a rich wife.”

What was the scariest thing you’ve done as a writer?

We’re supposed to do scary things? Maybe that’s why I have so many rejections.

What are you proudest of in your work?

When people mention how they love the words in AND THEN COMES HALLOWEEN, that makes me feel good.

How do you know when you have a story just right?

I don’t know. I love every bit of it from the first draft on. I didn’t get that critic’s gene that editors seem to have. If I get a suggestion about anything—“Why not make Billy a duck?” Hey, never thought of that, but it’s a great idea and I write and love it. Or, “Why not make Billy the bad guy, rather than the good guy?” Wow! Yeah. And off I go. Until I say, “Well, I guess I’m done.” That’s why I need editors.

How long was it between “I’ve got an idea” to “We’d like to publish your book”? And what happened in between those moments?

I’d say pretty close to 15 months. The short version: three people critiqued it—Kathryn O. Galbraith, you, and Meg Lippert. All of you said nice things and made helpful suggestions. When I felt it was done, I sent it to 11 editors. One of those (at Candlewick) liked it enough to offer editorial comments. From that point it was five months of back and forth suggestions and revisions. I am indebted to the three of you, my wife, and a one-time read from a critique group for kind and encouraging support and help.

What, if anything, in the writer’s life has caught you by surprise?

That the book made it all the way through. Rejections were the norm.

A series of questions about work habits:

o Coffee or tea? Coffee at breakfast; tea, later, if I think of it.

o Quiet office or music going? Occasionally I think about music but it seems such a hassle to load in the disc and then find it in iTunes.

o Desk: messy or tidy? Messy, yearning to be tidy.

About your new book: 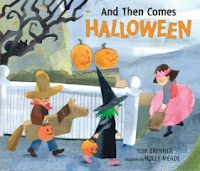 True confessions: I’m not usually very crazy about Halloween books. But And Then Comes Halloween is so poetic and evocative; it caught my heart from the get-go.Tell us about the seed/inspiration for this story.

It was a class assignment, about four years ago this week. And there’s a little more to this story that I’ll get into at the Inside Story, but basically I remembered how my own kids and my sixth grade students talked about what they were going to be for Halloween. And I thought, man, when the days start to get shorter and chillier and the leaves start to turn, then they have to get cracking on their costumes — ransack closets for old hats, weird clothes, and so on.We were vacationing in New Mexico at the time and I had these thoughts in the middle of the night. I had the pattern in mind of WHEN nature does its thing, THEN you (the reader) have to get busy. That made it relatively easy to keep going right up to the dumping the bags of candy on the floor. I wrote a draft of the story and emailed it to myself.

The images created by your words are so vivid. It feels like there must have been a lot of word play as part of the pre-writing process. What are some of the techniques you used in writing the book?

When I got home from New Mexico, I wrote another draft, and it was then that I started to see rhythms, to sense the importance of verbs, etc. The original second line was “when the leaves turn red and gold,” became “when red and gold seep into green leaves,” which I later heard is not scientifically accurate, but it was too late to make a change. I figured I’d plead poetic license. the sun doesn’t actually rise, either, but we still say sunrise and sunset.

This book is for a younger audience and Halloween can contain so many scary elements — how did you manage the tension between those two things?

I had more scary things in the earlier drafts, but as the book shaped up under the direction of the editor, the scary things were subdued (and in my opinion made charming by the visuals). I’ve always thought of Halloween best as not edgy scary, but just a little tingly scary, the kind that makes you laugh—a chance for kids to dress as anything they want, to be another person (which can be kind of thrillingly scary) for that one night. And get candy.

Did you have any conversations with Holly Meade about the illustrations (which are fabulous – the collages are the perfect match to the story)? If so, what did you chat about?

No direct contact at all until the book was printed, then I emailed her to tell her how much I loved what she had done. All through the process, Candlewick gave me opportunities to comment on what Holly was doing, but only through the editor. I always tried to convey how much I liked the art.
What is your favorite Halloween memory?

Took place in Charlotte, N.C., but too long to tell here. I used it the first revision for an expanded Halloween night and thought I had blown the whole thing, even after warnings from very knowledgeable sources.
How are you celebrating the launching of this, your first, book?

I’ve had “parties” at Vashon’s Books By The Way and at Secret Garden in Ballard (Seattle). And I look at the reading at schools as a celebration. It’s very much fun to be back in the classroom, especially doing a small writing/art project. 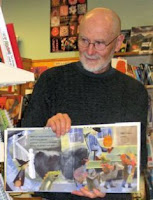 Tom at Secret Garden Bookshop, courtesy Gary Haarsager
What’s next for you? What’s in the works?

I have several projects going – each in a different direction. The editor (of And Then Comes Halloween) has rejected three things already. My mantra has always been write it and send it; it’s only postage.

Prior interviewees have shared secret talents with us (for example, Susan Patron shared her recipe for making a flaming dessert). What secret talent do you have that we might not know about?

I don’t know if it’s a talent. I’m certainly not the only one who has done it, but I built a house mostly by myself, using weekend help from family and friends and a concrete truck for the foundation. I took a class on how to build a house. (I love education). I designed it, drew the plans, and went from foundation to staining the deck. I feel good about that. The closest I’ve been to being published until now was being a chapter in a book by George Ehrenhaft, The Builder’s Secret where he told the stories of nine people who had built houses mostly by themselves.

The house that Tom built