I met Sandy Evans back in May at event sponsored by the Western Washington SCBWI called Inside Story. I loved the back story about her book, This is Not a Werewolf Story (Atheneum Books for Young Readers)  so asked if she’d be my Friend Friday guest — and I was thrilled when she agreed. 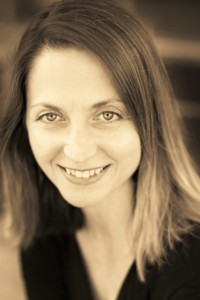 Honestly, in creative terms, I burned down the house and everything in it when I wrote This is Not a Werewolf Story—it’s a bonfire of all that inspires and fascinates me, from medieval French, Celtic, Norse, and Native American legends to the wave theory of light and the tracing of genetic history through the maternally transmitted mitochondrial DNA.

But there was one source I discovered after I had written it.

I was finishing my first major revision when my sister told me a story my grandpa had told her. One of the ones he probably told over and over, but he never told it to me.

My grandpa was born in a town called Welcome, where Mosquito Lake Road meets the Mt. Baker highway just north of Deming. There’s a schoolhouse he used to point out to us, and a graveyard we visited where his mom was buried when he was 13. After her death it was just my grandpa and his dad. I have a photo of them, two strong men leaning against the side of a white house. My grandpa holds a cigarette between the index and middle fingers of his left hand, his thumb hooks loosely into the pocket. Their arms touch from elbow to forearm. They are together and alone and I think that’s how it must have been for a long time after my great-grandma died.

The story my sister told me is how when my grandpa was 13 or 14 he’d take his gun and go out into the woods to hunt. Sometimes he’d walk farther and stay out longer than he’d expected. So he’d look around and find a big old fir and lean his back up against it and settle his hat down over his eyes and spend the night just like that.

It’s not really a story. It’s a memory of a way of being.

I didn’t remember it, but I recognized that memory as soon as I heard it. The picture was with me from the moment I began writing This is Not a Werewolf Story–a motherless child sheltered by the dark trees, the feeling of wonder that in nature nothing and no one is ever truly lost. It made my skin tingle. My grandpa’s story of a boy alone but not lonely in the woods was in my story all along even though I wrote mine well before my sister told me his.

It made me wonder. Recent studies suggest that trauma is passed genetically to succeeding generations. Why can’t other experiences be carried on our DNA as well? Maybe my grandpa’s memory was coded deep inside me, a cellular lesson in love inscribed in alternance to the wounds of loss.

Maybe, if I’m lucky and if I sit long enough and quietly enough with my fingers on the keys, more of those memories that aren’t mine and are in me, will untwist into words.

I am curious whether others have had a similar experience of writing what you shouldn’t know, and discovering it later. Or have you written a passage and then later felt like a sorceress as the events you imagined take shape in your life? I would so love to hear about it. 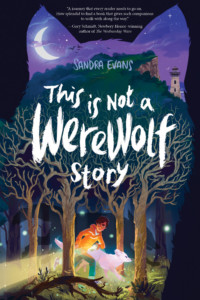 Sandra Evans is a writer and teacher from the Pacific Northwest. She holds a Ph.D. in French Literature from the University of Washington. Her middle grade novel, This is Not a Werewolf Story (Simon & Schuster July 2016), was inspired by her favorite 12th century French tale, Bisclavret, by Marie de France. Selected as an Indies Introduce title for Summer/Fall 2016 and with a starred review from Booklist, This is Not a Werewolf Story is Sandra’s first book for children. In July’s School Library Journal Mariah Manley writes, “Heartfelt, enigmatic, and ethereal, Evans’s excellent debut novel takes readers on a roller coaster of emotion and keeps them guessing the whole way through.”

Sandra shares her free time with her husband, son, and her dog Bingo—walking on the beach, going to the YMCA, hanging out in bookstores, playing cards in coffee shops, and watching any and every PBS series that features British accents and period clothes. More about her here