My darling friend and Butterfly Sister Augusta Scattergood (Making Friends with Billy Wong) suggested I ask her friend Rob Sanders to be part of Friend Friday. Of course I said yes! The whole purpose of this feature is to shine the spotlight on as many new books and their creators as possible (that’s a not-too-subtle hint that I’d like to host you, person with a book coming out!). Lucky for us, Rob agreed to participate and even suggested running his post during Pride Month. The timing is perfect to learn more about the story behind the rainbow flag–an image we’re all familiar with but likely don’t know its creation story– through Rob’s latest book, Pride: The Story of Harvey Milk and the Rainbow Flag (Random House). 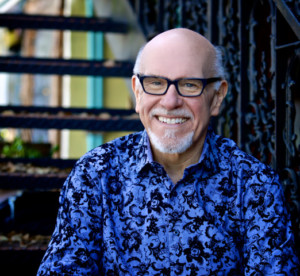 Happy Pride! Around the world festivities are held throughout the month of June to celebrate Gay Pride and the LGBTQIA community. Why June? Because June 28, 1969 was the Stonewall Uprising in Greenwich Village New York, the event that many consider the beginning of the modern gay-rights movement. On June 25, 1978 the first Pride Flag designed by Gilbert Baker flew in San Francisco in a parade organized by Harvey Milk. June 26, 2015 was the day the U.S. Supreme Court declared marriage quality the law of the land. So, once again I say, “Happy Pride!”

On that day back in June 2015, I was glued to the television waiting for the SCOTUS decision. It was a day of celebration for our community. That night, it seemed the entire world was washed in the colors of the rainbow flag—from Niagara Falls to the Empire State Building to San Francisco’s City Hall and all the way back across the country to the White House. As I saw the images of the rainbow-colored landmarks, I knew that this story—the story of the Rainbow Flag—needed to be told. Children needed to know the importance of that symbol, how it came to be, and why it’s still important to the LGBTQIA community. I wrote my first draft that night. 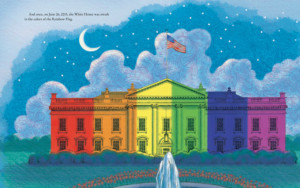 Of course, a first draft does not a picture book make, and I still needed to research the subject. Yes, I went about the process backwards. A writer usually researches first, but this was a book written from the heart, and I had to get the story down on paper. Luckily, I found lots of research material: news footage, interviews, books, magazine articles, and more. As I researched for comp titles I discovered that while children’s books had been written about Harvey Milk, a book had not been written about the Pride Flag itself. After a few more drafts, I sent the manuscript off to my agent, Rubin Pfeffer. Rubin was immediately excited about the project. By mid-August the book was bought by a young, charismatic editor at Random House named Michael Joosten.

Michael is what everyone wants in an editor—passionate, hardworking, thoughtful about every word of a manuscript, and industrious. It was Michael who was able to get in touch with Gilbert Baker, the designer of the Pride Flag. I had tried for several months to reach Gilbert, without success. Not Michael. He got immediate results. Gilbert read the manuscript at two different times and gave us important notes that helped further shape the book. Steven Salerno was brought in as the illustrator, and what a perfect choice that was. At every stage of the process—from sketches, to colored art, to f&gs, and then the finished book—Steven’s illustrations have moved me and have taken the book to a level beyond my imagination.

PRIDE: THE STORY OF HARVEY MILK AND THE RAINBOW FLAG (Random House) was released by Random House on April 10 of this year. The official description of the book reads: “In this moving and inspiring story, young readers will trace the life of the Gay Pride Flag: from its beginnings with social activist Harvey Milk and designer Gilbert Baker to its spanning of the globe and its role in today’s world. This remarkable true story is one of love, of equality, of hope, and of pride.”

I’m thrilled that PRIDE: THE STORY OF HARVEY MILK AND THE RAINBOW FLAG (Random House) is now in the world, in libraries and book stores, and in the hands of children and families. One last time, let me say, “Happy Pride!” 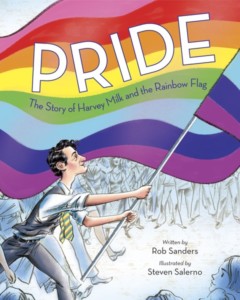