Today’s guest is a friend from the (sadly) now-defunct Northwest Institute of Literary Arts MFA program. I was the first faculty member in the children’s literature arm of the program and Loren Cooper was a student specializing in fiction. I badgered him into participating in a student reading one night and he good-naturedly humored me, later writing an essay about the experience which cemented our friendship. Though I don’t often feature adult work in this spot, I am delighted to introduce you to Loren Cooper and his much-talked about new novel, CrossTown (Red Hen Books). 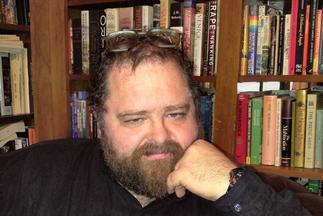 “…The Gold came on as a storm spreading across the sky, having picked clouds up on its journey.  The first raggedness in the wind warned me.  Then the rains came from light streamers of cloud, falling softly like tears through pale, tinted light.  The wind grew steadily stronger, until the noise of it rose to a familiar rumble, like a mighty river in full flood.  When my prey crested the trees, the heart of it still burned a dark, resentful yellow-brown, but crimson, midnight blue, and ash gray swirled around its edges.  The light fell down through it as if through the stained glass of a cathedral…”
— from CrossTown

Fantasy would seem by definition to be the realm of the unreal, stalked by phantoms, ghosts and illusions, but is not all fiction fantasy?  Are not all works of fiction the children of imagination?  Some works and genres may claim to be closer to the real, whatever that may be, than others, but there is a reason the language of psychology is the language of myth.

Jung put it well.  He said, “…All the creative power that modern man pours into science and technology the man of antiquity devoted to his myths… This activity of the classical mind was in the highest degree artistic: the goal of its interest does not seem to have been how to understand the real world as objectively and accurately as possible, but how to adapt it aesthetically to subjective fantasies and expectations… Thus there arose a picture of the universe which was completely removed from reality, but which corresponded exactly to Man’s subjective fantasies…”

Objective and subjective realities clash all the time—it’s called life.  Storytelling in whatever form is a part of that and how we understand it.  So then, why use historical events or characters in fiction?  Why study history only to have those characters crop up in a work of fiction isolated from their historical context (unless one is writing historical fiction)?

I would argue that even in the wildest fantasy, there is a place for historical research.  Such research provides a level of specific detail which in turn adds depth and verisimilitude to the fictional work.  The fact that the historical event or character may have independent recognition for the reader adds an opportunity to increase the connection required to maintain Gardner’s fictive dream, but there is a risk that deviation from historical norms might throw the reader out of that same fictive dream. Detail is crucial not just to the feel of the character, but to the depth of the world.

So back to historical elements in fiction.  What’s the point?  Are they useful, and if so, why? Research, be it about the time in which a character lived, or details about that person and the things they did and experienced, lets a storyteller provide an arsenal of detail that can be used to make those connections that lead to establishing a successful fictive dream.

Take the quote from my novel at the beginning of this article.  Much of the detail in that passage has come from specific eyewitness accounts collected about the Tri-state Tornado.  A short digression: the Tri-state Tornado, on March 18, 1925, ripped across Illinois, Missouri, and Indiana, taking almost 700 lives and virtually wiping several communities off the map.  It was the deadliest tornado in US history.

The anomalous behavior of the storm and its deadly nature has made it the subject of numerous works, and most of those works include eyewitness accounts.  In those accounts as in most eyewitness experience, the detail reveals both the power and ephemeral nature of violent experience.

Like the metaphor of reality in the Rig Veda, where several blind men try to describe an elephant and each comes away with a true but partial description of the beast, each detail is a separate shifting thing yet part of a greater whole.  So when I decided to use the storm as a backdrop for a few events in the book, I leaned on the eyewitness accounts to provide the specific detail I needed to add depth.  And in doing so, I found that the tone of the experience also informed the work, that the grief and loss of the people who were left behind in the storm’s wake became an inextricable part of the story.

For me that’s the answer to why one would use historical characters or research in a story perhaps far removed from that time and place: it adds depth, and life, and carries deeper meaning into the work it informs if used well.  As storytellers, we want more than to simply pass along information or even stimulate an emotional response.  Our goal is to carry the audience on a journey that enlarges their world, informs it, expands it, and perhaps improves it.  If we can draw on all the depth and richness of all the stories and histories that surround us to do that, then we should not ignore such a powerful tool.

And if our audiences become impatient enough with our account that they become tempted to go out and dig deeper into that history?  Then as authors we will have succeeded beyond even the vaulting ambition of touching another soul with story. 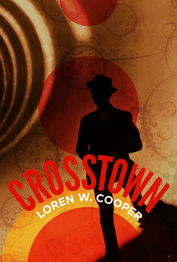 Loren Cooper lives in Cedar Rapids with his wife and daughters. He’s been publishing books since about 2000. He has an MFA with a teaching emphasis. He loves reading, writing, brewing, martial arts, technology, and his family. CrossTown is his sixth published book.