This summer, at the International Literacy Association conference, I had the privilege of hearing Jane O’Reilly accept an award for her novel, The Notations of Cooper Cameron (CarolRhoda Books). I was so touched by her speech that I wanted to get to know her better. My wish came true when she sat in on the panel presentation I was part of. We chatted afterward and she graciously accepted my invitation to be a Friend Friday guest. As soon as I got home from the conference, I got a copy of her book, which I devoured. I hadn’t read a book in long time that touched me as deeply as Cooper’s sweet, honest story. I found myself copying out lines, like this one:  “Sometimes wonderful sneaks up on you when you’re not looking.” Or this one: “Sometimes the scariest things you do are the best things you do.” For sure, one of the best things you can do, friend, is read Jane’s gem of a novel. After you read her post, of course. 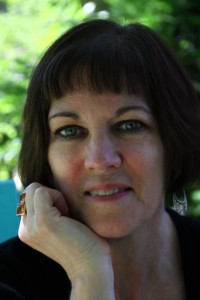 Thank you, Kirby, for inviting me to a part of Friend Friday. I am humbled to be included among these wonderful creators of art and stories. And in this wintry season of traditions and good cheer, I wish everyone reading the warmth and safety of friends, family and good books.

I first imagined the book that became The Notations of Cooper Cameron (CarolRhoda Books, A division of Lerner Publishing Group, Inc.) after hearing my older sister, Catherine, a journalist, read an essay she called Fire Child about her childhood struggles with Obsessive Compulsive Disorder. Until that moment, I had no idea my sister had had such a struggle. She is 13 years older than I am and by the time I was old enough to pay attention to things, she was living away from home.

Catherine read about a nine-year-old girl whose odd behavior—hand washing in the air, touching and counting things—made her friends and family afraid of her. The truth was, she was desperately afraid of the world, and particularly afraid that if she didn’t count and touch and wash, the people she loved most would burst into flames. As Catherine read, my heart went out to my child-sister I never knew.

Yet I knew I had to write her story.

When she gave me the okay, I got to work. I read articles, books and case studies on OCD, created a list of questions and took my sister to lunch, where I bombarded her the way a journalist might until she started to cry. “I’m sorry,” I said. “Is this too much? Should I stop?” She shook her head. “No, that’s not it,” she said. “This is the first time anyone ever asked me what it felt like.”

The first time. After more than fifty years.

I called my work-in-progress Fire Child because I couldn’t imagine a better title. I also imagined the finished story as a picture book.

Yes, it’s a good thing I have a flexible imagination. Catherine, a nine-year-old girl, became Cooper, an eleven-year-old boy. The story became a novel, and the title became Cooper’s Notations on the World until the marketing department at Lerner determined that the “world” was too great an undertaking.

But the world was not unwieldy for the Cooper I imagined. I decided he would overcome what he could the best he could to be the center of a story about hope. To counter the fear in those he loved, I made him the invisible glue—an unlikely hero—that held his disintegrating family together.

I think I succeeded.

From the beginning, Cooper’s story was challenging to write. I felt as if I channeled him, thinking in staccato sentences and doing things in threes myself. It was scary, but I knew, then, that I was writing a true story. However, I had a complicated 3rd person POV going in which Cooper talked about himself. It was genius and clever, but also hard to follow. When my wonderful editor, Alix Reid, asked me what I wanted for the book, and I said, “For Cooper to be understood,” I suddenly saw the answer in my own work.

Even in the first draft, Cooper’s helpless father referred to him as “that boy.” As I revised, I figured out I could use “That Boy,” as Cooper’s reference to those times that fear overwhelmed him and his rituals set in. “That Boy” became a theme that separated the real boy from the perceived boy—a distinction the outside world had trouble seeing.

Of course, there are many truths in this crafted work of fiction. I set the story at the family cabin and filled it with memories—my son’s pet frog that traveled with us for years, my grandfather’s wooden boat, turtle races and souvenir shops in the nearby tourist town, gray, soggy rain that kept us indoors for days and many more. Ironically, the cabin was sold the summer before COOPER hit the bookshelves, but I feel I have pieces of it recorded forever. 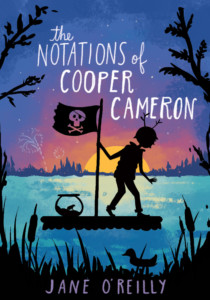 The Notions of Cooper Cameron by Jane O’Reilly published by CarolRhoda Books, A division of Lerner Publishing Group, Inc.

Jane O’Reilly holds an MFA in Writing for Children and Young Adults from Hamline University and is the recipient of McKnight Fellowship in Screenwriting. Jane writes for children because she believes curiosity and hope are the foundations for growing up in our complex world. She grew up in an old house in Fort Snelling, Minnesota, and divided her childhood summers between family camping trips and the cabin her grandfather built in the North Woods of Minnesota. She has three children, six grandchildren, and writes in a 100-year-old house in Minneapolis where she lives with her husband, John, and dog, Poppy. She is the author of the acclaimed middle grade novel, The Secret of Goldenrod, (CarolRhoda Books, 2016.) Someday Jane hopes to write a picture book for real! You can read more about Jane on her website.