It was Dave Patneaude’s son who introduced us, eons ago. I’d been a judge for the PTA Reflections contest and selected Jeff’s story to move on to the next level of competition. Dave and I met at the reception for the winners and we’ve been friends ever since. He is such a fine writer, crafting stories with heart, suspense and adventure. In my mind, he is the king of weaving description into a narrative. We were in a critique group together for years, and I got to hear his profound Thin Wood Walls long before it appeared in print. I respect his writing skills so much that when I dared to tackle my first novel (Hattie Big Sky), I called Dave and asked him to talk me through the process. Which he generously did. Dave and his librarian wife Judy are particular heroes of a certain four-footed Larson household family member who stays at Camp Patneaude whenever we are out of town. I am thrilled to be able to shine the spotlight today on Dave Patneaude, in celebration of his latest book, Fast Backward (Koehler Books). 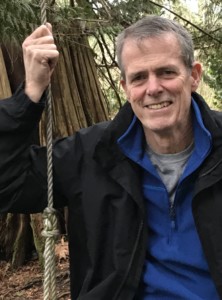 Webster’s Urban Dictionary defines a “dry spell” in these words: “To go for a period of time without something; sex, drugs, etc.” Or in my case, something more mundane but also family-friendlier, specifically, getting a book published.

My dry spell began after the publication of Epitaph Road in 2010. Without getting into the tiresome details, here are some reasons (excuses?) for my lack of visible production: struggling economy, editor quit, publisher quit, agent quit, editors (other ones) retired, turnovers, mergers, buyouts. Also had no luck with new agents, and to be honest, I have to assume (painfully) that some of the drought was my fault. I just didn’t write anything exceptional or relevant or timely or fashionable or trendy enough to make an agent or editor think, “I gotta have this.” Or if I did, it didn’t go to the right agent or editor. I didn’t do a good job of matching what I was writing to what they were wanting.

You’ll notice I mentioned “visible” production. That’s because I hadn’t gotten discouraged (much, anyway). I may have involuntarily given up on publication, but I hadn’t given up on the writing part of this job. I got the rights back to Epitaph Road, revised it, and self-published it last year. I wrote and revised a collection of spooky short stories called Uneasy Pickings and self-published it last year. And I continued to work on my “mainstream” stuff—novels for middle-grade and young adult readers that I hoped to get in front of an editor or agent who would think and maybe say, “I gotta have this.”

One idea I began working on about four years ago was a kind of perfect storm of some of my interests as both a reader and writer. I like history. I like the World War II era. I’m fascinated by the development of the atomic bomb—how it happened, how it impacted the world, its potential for unimaginable destruction, how it hangs over our heads to this day and maybe forever. I’m concerned about the world we live in, politically and environmentally. I’ve always been a fan of speculative ideas and fantastic concepts and the answers to “what if” questions that we can barely formulate because they’re on the outer periphery of what we can even imagine.

I had a basic idea: What if a kid witnessed the detonation of the first atomic bomb? That question gave me a character. And a setting. From there, I did a lot more thinking, a lot more what-iffing. What if the bomb blast wasn’t the only amazing experience he had that day? What if, riding his bike home along a lonely desert road, he came across a naked girl, his age, who spoke with a German accent, who was confused about time and place, who was underweight and unwell, who told a fantastic story about arriving from the future? Who claimed that Hitler had won the war?

Would anyone believe her? And then what?

About halfway through my first draft I visited the Trinity test site in New Mexico. I learned a lot but realized I had more to learn. I settled in for more research, more what-iffing. I got through the first draft and revisions and feedback from kind readers. Somewhere along the line I came up with a title—Fast Backward (Koehler Books)—and began approaching publishers. Eventually I found one. On June 1st, after nearly eight years, my dry spell will officially end. And at 7:00 on June 16th, at Brick and Mortar Books in Redmond, we’ll be celebrating. It would be fun to see you there. 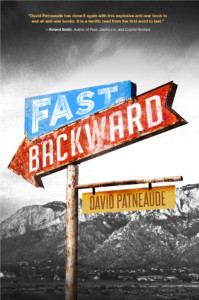 David Patneaude began writing seriously (more or less) in the 1980s. His first novel, SOMEONE WAS WATCHING (Albert Whitman and Company), was published in 1993. His books have been named to dozens of state young readers’ lists and honored by the New York Public Library, the Society of School Librarians International, the Winnetka (Illinois) Public Library’s “One Book, Two Villages” program, and the Washington State Public Library. His 2010 YA novel EPITAPH ROAD was a nominee for the 2013-2014 Nebraska Golden Sower Book Award. His newest, FAST BACKWARD (Koehler Books June 2018), has garnered much early praise. When he’s not in a coffee shop writing, or at a school or library or conference discussing writing, or on the trail thinking about writing, he’s home in Woodinville with his wife Judy, a middle school librarian.