There are so many kind and generous people in the kidlit community, and I would say Caroline Starr Rose is near the top of the list. She is so self-effacing that I nearly did not recognize her when she sat next to me at nErD Camp MI this summer! It was sheer joy to spend a few precious moments in real time and space with her. And it is more than sheer joy to lose myself in her wonderful writing. I am thrilled to host her today in celebration of her newest book, Ride on Will Cody! (Albert Whitman and Co), Joe Lillington, illustrator, which launches on Sunday, October 1st. 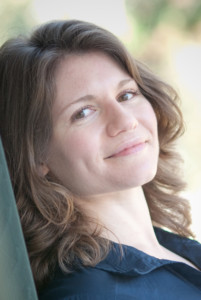 In the summer of 2012, my family took a road trip to Denver and the communities nearby. While we were in Golden, CO, I happened to see a sign for a Buffalo Bill museum and asked my three guys to indulge me in a little side trip. We drove up a winding mountain to the museum on the crest. As we wandered through the exhibits I saw everything I love to write about — history, adventure, and a whole lot of grit. That’s when I decided I’d like to try my hand at a Buffalo Bill story.

The following January I dug into researching this larger-than-life man, sure my book would focus on his Wild West show. But it was a story about his boyhood days (possibly) riding for the Pony Express that really captured my imagination. According to legend, fifteen-year-old Cody (then known as Will) took the third longest ride in Pony Express history. It covered 322 miles, required 21 horses, and lasted 21 hours and 40 minutes. The only time Will stopped was to switch horses.*

Ride On, Will Cody! languished for years on submission. I had plenty of time to wonder if the book was over and done with. Dead on arrival. Not. Gonna. Happen.

But this story about resolve and a long, long ride wasn’t finished yet. I asked my agent to try one more editor. Months passed. I finally let myself grieve. The story just wasn’t meant to be.

An offer came from that last editor, almost three years after the manuscript first went on submission. 35 months, to be exact. That’s nearly double the length of time the Pony Express was in operation.

Will’s ride was the third longest in Pony Express history. My story about his ride was on submission almost three years. The ride required 21 horses and 21 hours. Guess how many rejections the story got before finally finding its perfect home. That’s right. 21.

Though a three-year journey is not what I’d asked for, it’s most certainly the one Ride On, Will Cody! needed to take. In a line of work with no guarantees, the experience has strengthened my resolve to keep moving — keep riding — toward whatever lies ahead. 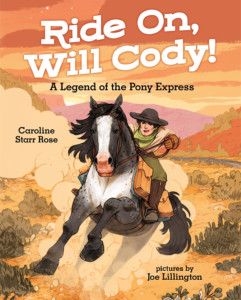 Caroline Starr Rose is an award-winning middle grade and picture book author whose books have been ALA-ALSC Notable, Junior Library Guild, ABA New Voices, Kids’ Indie Next, Amazon’s Best Books of the Month for Kids, and Bank Street College of Education Best Books selections. In addition, her books have been nominated for almost two dozen state awards lists. In 2012 Caroline was named a Publishers Weekly Flying Start Author for her debut novel, May B. She spent her childhood in the deserts of Saudi Arabia and New Mexico and taught social studies and English in four different states. Caroline now lives with her husband and two sons in New Mexico. You can find her online at www.carolinestarrrose.com