I met Anica Mrose Rissi in line at a car rental counter. Okay, we had arranged to meet there, because she had kindly offered to drive me from the Detroit airport to nErD Camp MI (you should go next year!). From the first hello, I felt as if I’d reconnected with an old friend. In addition to being an excellent driver, Anica is an excellent writer. Her Anna, Banana series is spot-on for that newly confident younger reader and I predict that her debut picture book, The Teacher’s Pet, illustrated by Zacharia Ohora (Disney-Hyperion) will be an instant back-to-school classic. Join me in celebrating Anica today! But wait: there’s more! Read on to learn about Anica’s book GIVEAWAY! 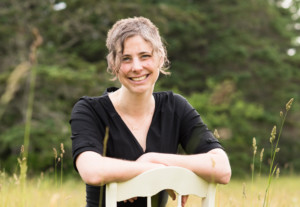 The Teacher’s Pet is my first picture book, and I must admit: I had no idea what I was doing. But that, I think, is what allowed me to write it. 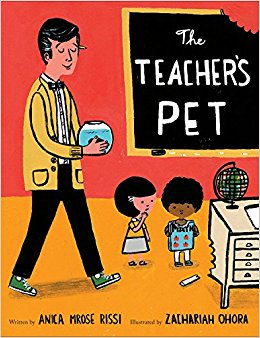 I first started writing picture books as a palette cleanser between drafts of my Anna, Banana chapter books—a way to immerse myself in a new plot with different characters for a few short weeks, so I could recharge my brain and return to the old, familiar characters (and tight deadlines) with fresh energy and perspective. Writing anything in that first year of being a “real” author felt audacious and required daring (who did I think I was?), but the world of chapter books at least had some comforting familiarity: I remembered being a reader who’d loved Ramona Quimby, Ralph S. Mouse, Henry Huggins, Otis Spofford, and even a few characters who didn’t come from the brain of Beverly Cleary; and as a children’s book editor, although I’d specialized in YA fiction, I had a few chapter-book series under my belt. But picture books seemed like a whole new universe, and as scary as it was to venture into it, there was freedom and relief in simply playing with a story that could only be for fun because I didn’t know the rules of creating it.

(At least 80% of being a writer is, for me, tricking myself into writing, while pretending that’s not really what I’m doing. But that’s another story for another time, if Kirby ever wants to invite me back.)

I wrote and revised three other picture book manuscripts before I wrote The Teacher’s Pet, and with each I learned a lot about the elements unique to the form: the dramatic and comedic potential of page breaks, the humor (and pitfalls) of repetition, the art of leaving space in the narrative for a visual story to unfold. The more I learned about the medium, the more excited about its possibilities I became. But picture books, as an editor friend warned me, are very hit or miss, and it took me several misses before I hit on a concept that would soar.

I knew as soon as I thought of it that The Teacher’s Pet would be The One, but although the idea (starting with the title) came quickly and easily, it still took several months, and innumerable drafts, to find the right rhythm, voice, and plot beats for the story. The characters, though—especially Bruno, the unruly class pet, and Mr. Stricter, the teacher who loves him so much, he can’t see all the trouble Bruno is causing—I felt I knew before I even met them.

A confession: My dog, Arugula, is not always perfectly behaved. She has barked at friends and jumped on invited guests. Once she made papier mâché of my apartment with a ripped-up bag of flour and saliva. She’ll steal food off the top of the refrigerator (a spot we’ve learned isn’t out of her reach), and delights in rolling in anything stinky. And yet, I think she is wonderful, the most perfect pet in the world, even when she eats half my birthday cake before I’ve gotten a piece. 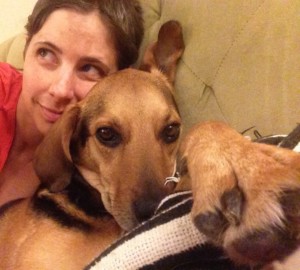 This dog not perfectly behaved? I don’t believe it. ~ Kirby

I hope readers will relate to the characters in The Teacher’s Pet, too, even if they side with the kid narrators, who quickly see that Bruno doesn’t belong in the classroom, and must find a way to convince Mr. Stricter. And I hope the story will make readers giggle. I certainly had a lot of fun writing it, and finding a familiar heart within an unfamiliar form.

Thank you, Kirby, for giving me the chance to share it here!

Giveaway: I will send a signed copy of The Teacher’s Pet (plus some limited-edition stickers and bookmarks) to one person who retweets the link to this post between now and midnight on Monday, August 28. Simply retweet Kirby’s original tweet to enter! (U.S. addresses only, due to postage costs.)

Anica Mrose Rissi grew up on an island off the coast of Maine, where she read a lot of books and loved a lot of pets. She now tells and collects stories, makes up songs on her violin, and eats lots of cheese with her friends in Princeton, New Jersey, where she lives with her dog, Arugula. Find out more at anicarissi.com, and follow her on Twitter and Instagram at @anicarissi.